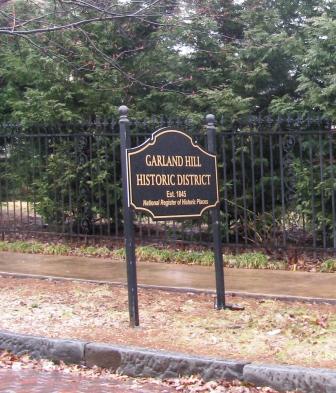 The area from Third Street to Blackwater Creek was originally the William B. Lynch Farm. A son of John Lynch, founder of Lynchburg, is said to have had his house at what is now 208 Madison Street. The area between Second and Third Streets on the opposite side was known as Lynch's garden. Stables and servant's quarters were located between First and Second Streets. The only building left from the farm is 619 First Street, built in 1787 by John Lynch. In 1845, the farm was left by William B. Lynch, Jr., to Celine Dupuy, a cousin. It was Mrs. Dupuy who divided the property into lots known today as Garland Hill.

Garland Hill was fully incorporated into the city in 1870. During the mid-19th century, the area was so populated with the Garland family that the "Hill" took the family name. Samuel Garland, Sr., a wealthy Lynchburg lawyer with extensive agricultural interests and properties in Mississippi, purchased Lot 7 and built a home. He was only the first of many members of the Garland family to live on the hill. His nephew and namesake, Samuel Garland, Jr., moved into the Walter Dunnington House after 1851, and other members of the family lived nearby. 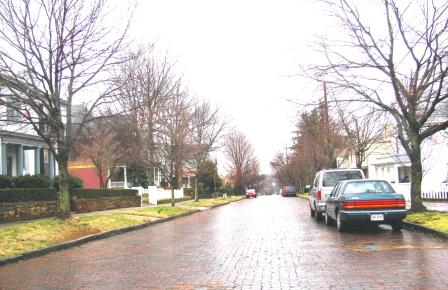 By the time of the Civil War, the Garlands and their relatives were living in numerous houses on the hill.  Madison Street, one of the most fashionable in Lynchburg, was among the first residential streets in the city to be paved in brick in 1895 (along with Court and Cabell Streets). Much of the original brick paving remains, although some has been damaged by utility work. Original curbing, as well as flagstone and brick walks, can be seen along Madison and Harrison Streets.

The original lots were an entire block in size. Note the generous spacing of the older homes. By the turn of the century when this area was known as "Quality Row," most of the large lots were already built upon. Several lots were then subdivided to make way for more houses. Therefore, there are quite a number of different architectural styles throughout Garland Hill, ranging from classic mid-19th century styles to more elaborate Victorians.

As Lynchburg expanded and other areas supplanted Garland Hill as the fashionable place to live, the original families gradually moved away. Some of the larger homes were converted to apartments, starting with Halsey Terrace (220 Madison Street) in 1926.

Garland Hill suffered badly from urban decay and uncaring absentee landlords in the 1960's and 1970's. The situation began to turn around in the late 1970's when new owners started to move into the neighborhood. Several homes were converted to single family dwellings once again and many were restored to their original splendor. Renovation work continues throughout Garland Hill to this day.

In 1978, Garland Hill was designated a Lynchburg Historic District. It is included as a Virginia Historic Landmark and is listed on the National Register of Historic Places

These homes have sold between 20k up to 500k.  There could be a tax advantage in this area because the City of Lynchburg is encouraging home owners to rehab these properties and "freeze" the tax assessment for ten years.  This could be a great savings.

This is located in a historic area so there are some restrictions on what you can do as far as rehab.  Generally they are not to concerned with any improvements you make on the inside of the property and you may have to get any major improvements approved through the historical district before starting your project.